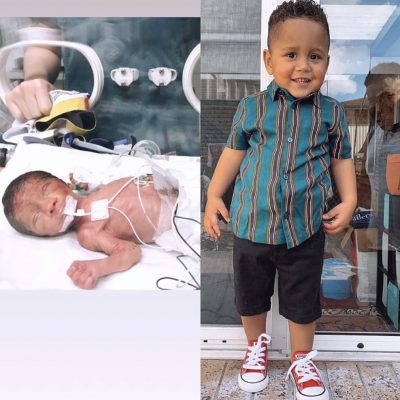 QLD Mum Cee-Anna had ruptured membranes at just 23 weeks gestation. On 20 hour strict bed rest to keep her little miracle inside the womb for as long as she can. Cee-Anna was told to stay at the Ronald McDonald house Brisbane incase of entering early labour that could happen anytime. After minimal growth and loss of heart beat. 11th of October 2017, Levani was birthed via emergency cesarean at 28 weeks, weighing just 799 grams. Levani was placed in the Neonatal Intensive Care Unit in Brisbane, QLD. Levani required a breathing support machine for the first 65 days of his life and was taken home on Oxygen support for a further 3 months. Levani spent a total of 3 months in hospital and was let home on his actual due date, 3rd of January 2018. Cee-Anna and partner also named Levani said it was the hardest thing they have ever had to witness. We made a promise to our son that he wouldn’t be alone on his journey. We rotated that clock to ensure at least one of us were always by his side. Cee-Anna believes her father that has now passed away sent her this baby. Since the day Levani was born we got signs that my dad was protecting and guiding my baby through what was already the toughest time of his life – Cee-Anna said. Levani is named after his Dad and Grandfather Dale. His an absolute miracle and is thriving in life. Father Levani explained his Son as the King of our hearts, his reminded me of what’s important in life. He has bought so much love and happiness into our lives and believes that’s what mother Cee-Anna needed after loosing her Dad. We’re blessed to have him here with us so we will hold on tight to him. Pictured is the day Levani born and today the healthy happy almost 2 year old.