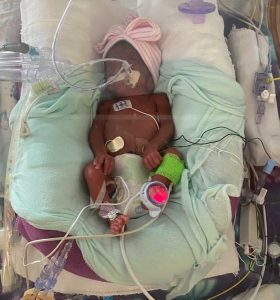 Isabella Sophia Goncalves and Alexandra Marie Goncalves were born at 25 weeks via gestational carrier, each weighing just 2 lbs and were 13.5 “. They were born January 14th with a due date of April 25th so about 15.5 weeks early, they were! We had a carrier due to an injury to my spine.

They spent 122 days in the Utah Valley NICU. Alexandra had two major brain bleeds at birth which caused her to get a reservoir placed for 62 days and then required a vp programmable shunt in May. They were discharged on May 15th from the Utah Valley NICU and we returned home to New York during the height of the pandemic by private jet because they felt that was the safest with germs and all of the oxygen and machines. When we came home they thrived so fast, off oxygen the first week!

Upon arriving home, Alexandra had craniosynostosis from the hydrocephalus and soon had surgery.  She just graduated from her helmet yesterday and is so happy to be done! 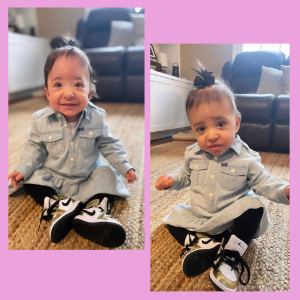 They sit up on their own, crawl everywhere, want to get into everything they can, they eat solid foods and love to feed themselves. Alexandra says a bunch of words and is so silly and funny. Isabella doesn’t say as many words but she is for sure the louder, but more serious one. They bring so 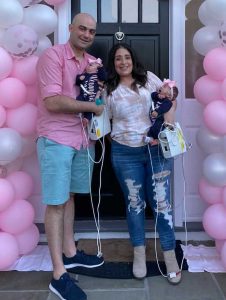 much happiness to everyone and we’re truly so proud and amazed at them for reaching all their milestones.