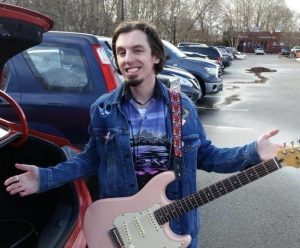 Early birth:
The cause of my early birth was because of a triple delivery . I was the lone survivor of triplets, one brother and one sister . My parents experienced lots of reactions, shock was definitely one of them . I had a lot to learn in a very short period of time. Breathing was one complication among many others. I also experienced early developmental delays but outgrew them early on. My dad recalls one particular instance where we went into Boston to check my vision. 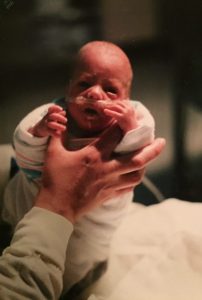 The doctor turned all the lights off in the room and flashed a flashlight into my eyes and apparently I didn’t blink. My dad said, out loud, “Oh no, he’s blind” and Patrick then I looked towards my dad and the doctor said, “I think he can see.” There was a lot of waiting and several specialist’s visits early on. In my mom and dad’s voices, “Looking back, I don’t know how we made it through.”

Growing up:
I was behind in school until my 20’s and then I started to catch up . My dad realized it with my thought process and vocabulary . In school I was always in Special Education until around 8

th grade where I started mainstreaming with the other kids in general education. Because of being in Special Education, I’ve seen another side of life with other kids who have special
needs as well, and that has shaped my life . I’ve learned and connected with other people with special needs and have learned that you need to have patience with people in certain situations. .
Being born early has shaped my life and continues to do so. It has taught me that in some instances my story, I feel, has helped people and given them hope with their own problems . Sometimes I’m the underdog and have to show people what I can do .

Fun facts about Patrick:
My fun fact is I love dogs and I’m on my third one. 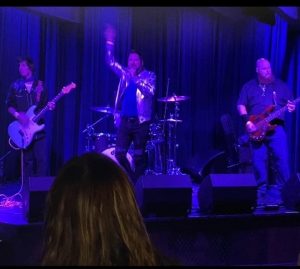 I got into music when some kids down the end of my street played in a rock band and I thought
It was cool. I have had an acoustic guitar since I was 10 or 11 but I didn’t take it seriously until I was about 12-14 years old. I’ve had a few different teachers over the years. Early on I began to learn how to play. I

got into classic rock music and blues which shaped my technique and style. I was always into writing my own music . I’ve also got to become good friends with Austin, a musician and also one of my fav players, Eric Tessmer.

Check out Patrick’s band: @crushedvinylband and @erictessmerband on social media