Alexis Grace Bleck
“Everything I thought I knew about being a mom changed the day Lexi came into this world. She
has forever changed me and is a daily reminder that miracles do happen!” – Preemie Mom, Tara Bleck

When I began to retain fluid during my second trimester, I chalked it up to “typical symptoms” associated with pregnancy, I mean what pregnant woman doesn’t get swollen feet at some point? The swelling increased and after several visits for outpatient monitoring of my urine and blood

pressure, I was admitted at 27 weeks with severe preeclampsia and HELLP Syndrome in my third trimester. My liver enzymes were elevated, I had low platelet count, and had developed Edema throughout my entire body. I felt like each leg was the size of a tree trunk and I could feel my skin stretching tight. When the doctor uttered the words “bedrest,” I remember thinking there is no way I can sit in a hospital bed for another 10-12 weeks. I tried to negotiate daily hospital visits for monitoring in exchange for my freedom to rest at home. Little did I know that 10 days later I would be rushed in for an emergency c-section due to complications from my diagnosis.

My doctor did everything she could to prolong delivery and give my baby (and myself) the best possible chance of survival. I was given a round of Magnesium Sulfate (Mag), which prevents seizures in women with preeclampsia, and can help prolong pregnancy while allowing other medications that speed up baby’s lung development to be given.

The morning of April 26th, I woke up with a sharp pain in my abdomen, which I blamed on garlic hummus I had the night before. It had kept me up all night — the nurse brought me an antacid to try and alleviate the pain, however, shortly after I vomited and in doing so caused retinal hemorrhage in both eyes. Yes, that is exactly what it sounds like, my eyes filled with blood. From that point on, it went downhill fast! That is the thing about preeclampsia, it can turn on you in an instant. Had I been home when this happened it could have ended much worse, for both my baby and me.

My blood pressure continued to climb, the pain in my abdomen was getting sharper and I was rushed in for an emergency C-section. Luckily, my husband arrived in time and was able to be part of the delivery. My memory beyond that is a blur and adrenaline took over, I only remember squeezing my husband’s hand and praying while I laid on the table waiting in anticipation to hear our baby girl’s sweet cry. Born at just 28 weeks and 3 days, weighing

only 2lbs, Alexis Grace forever changed our world. The minute I heard her, I sighed in relief as I watched the doctors and nurses check her vitals and take her away to the NICU.

Unfortunately, it would be a LONG 24 hours before I would be able to see or hold our baby girl as my postpartum health was a concern. Soon after delivery, I was given a second round of Magnesium Sulfate in order to reduce my risk of seizure and stroke. I remember this part as the worst, by far. The side effects of Mag are anything but pleasant. As I worked through my recovery, my husband was able to visit Lexi Grace in the NICU and show me pictures of her that he was able to take during her first few critical hours.

The days and weeks ahead were filled with stress, but in those moments, I felt an overwhelming
calmness knowing that everything would be okay. I needed to TRUST the doctors and nurses, and I needed to have FAITH in God that he would see us through it. 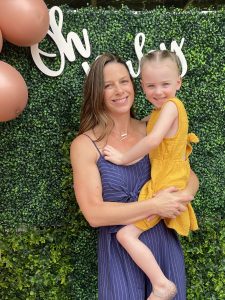 As with most premature babies, Lexi had Respiratory Distress Syndrome, which meant she needed help breathing, as her lungs had not fully developed. In addition to having a low platelet count, her weight dropped to only 1.5 pounds (just over a pound of butter!) and she could not regulate her body temperature. Like most of us NICU parents, Kangaroo Care quickly became my favorite time as it made me feel like I was actually able to “do something” that helped her. For many reasons, I was not able to produce much breastmilk for Lexi, but what little I did produce helped her get stronger. This was hard for me to accept, but I had to understand that my body was still recovering.

Just six days after giving birth, I was discharged from the hospital, which meant multiple trips daily back and forth. Every time I went, I hoped they would tell me that we were closer to bringing her home and each time I left without her I felt like I was leaving a piece of myself behind.

After spending 9 weeks in the NICU, Alexis Grace defied the odds and was able to come home at 37 weeks, weighing 5 lbs 4 ozs. There isn’t a day that goes by that I don’t think about how the outcome could’ve been so different had I not had the best possible care from my OB/GYN who not only knew how serious my condition was, but how to properly care for me. Not to mention the incredible doctors and nurses who provided care for Lexi, many who became like family to us.

Today, Lexi is 4-years old and full of strength and sass. She is very independent, strong-willed and everything has to be on her terms. I like to think that those qualities helped her persevere through her first few months. She is 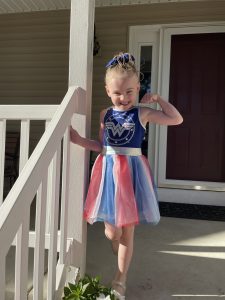 certainly our little princess and insists on wearing a tutu every day, which is funny because I always said if I had a girl, she wouldn’t be a girly-girl. Boy was I wrong! Everything I thought I knew about being a mom changed the day Lexi came into this world. She has forever changed me and is a daily reminder that miracles do happen!