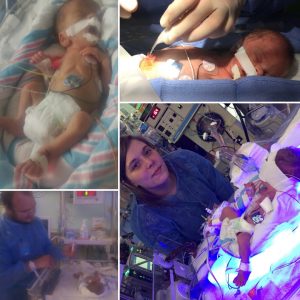 “I really wish I would have quit working sooner.” (Because I wasn’t able to take care of my health and wellbeing while working such a fast paced job in the restaurant industry.) – Sarah Beck

Our little warrior Silas was IUGR at his first anatomy scan. His femur was below percentile first and his tummy was next, measuring quite a bit under average. We were then on strict hospital bedrest (only out of bed for restroom trips & weekly showers). I had daily ultrasounds & dopplers. His umbilical cord was absent and had a diastolic flow, which basically means, at some points down his umbilical cord, he wasn’t receiving nutrients. His heart also looked “suspicious” but was beating strong!

After his growth ultrasound showed no growth at all in 2 weeks, his dopplers looked worse as well and his umbilical cord became reversed at some parts of his cord and he was also experiencing more and more distress leading up to his birth. I was prepped three times for a C-section in the middle of the night (when his heart rate dropped a lot). In the end, I incubated Silas for an entire month in the hospital.

Because of Silas being restricted, he was born small for his gestational age as well. He was asymmetrical because his head was larger than the rest of his body from brain sparring. It’s rare as only 3 to 7% of babies have IUGR. Not all IUGR babies are preemies. But I am grateful he was diagnosed with IUGR as it saved his life. More than a quarter of all stillbirths are found to have had IUGR. In our case, IUGR defined my pregnancy.

Placental insufficiency is what they call it. It failed. My placenta wasn’t providing what he needed. There is no way to know what caused it or how to prevent it. My placenta was biopsied, but nothing came from it. And I don’t have a blood clot disorder. They believe I could have had pre-preeclampsia. I didn’t have symptoms but I did have the elevated liver enzymes postpartum.

It’s a mystery. I hope we one day find answers to why these things happen. Why does the placenta fail? How to prevent IUGR because this happens far too often.

We are both here thanks to modern medicine and catching these things early. We are so blessed for the amazing staff at USA Children’s and Women’s Hospital that took care of both Silas and I for a total of 6 months.

Being born premature because of his severe IUGR (restricted growth in utero), he stopped growing because of placental insufficiency. His umbilical cord was absent with diastolic flow that then reversed the day they took him. He is a miracle…a miracle saved by modern medicine, technology and knowledge that he was at risk of being a stillborn.

Silas was born at 30 weeks weighing 2lbs 6.9oz (measured 26/27 weeks).  He is also SGA (small for gestational age), which brings a whole host of things, but feeding difficulties is a huge one that we are working so much on!

His birth weight measured at 27 weeks even though he was 30wks. Silas did what they called brain sparring. He decided in utero that he wants to live and he knew he wasn’t getting all the nutrients to supply every organ equally. He was restricted and he prioritized his brain and spared his brain from any lasting damage but the other organs took a hit.

His lungs took the biggest hit and so he had issues with his lungs that many micro-preemies have and came home on oxygen. 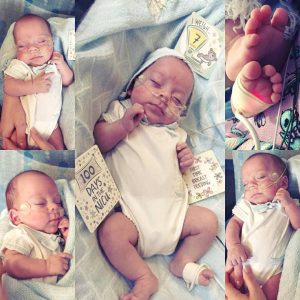 Feeding issues and tummy troubles (reflux, chronic constipation & gas) are very common in growth restricted children. In fact, these kids aren’t supposed to ever be fat. They are more likely to be diabetic if allowed to get even a pinch of fat on them. Their cells just don’t know how to handle the fat because their bodies never learned how to do that in utero.

These are the effects of IUGR:

Once he was stable and had baths, I didn’t miss many bath nights. I needed that for myself. It was his main care I felt part of quickly and was allowed to help even before he was stable. The main reasons I didn’t get to give him baths sometimes is lack of nurse-to-nurse communication. I washed his hair on his very first bath 2 days after his birth. He did not react well. My mom thinks the bath set him off before being intubated later that night. Silas did not like to be touched and the bath was just way too much for him. I too was in sensory overload and also in a lot of pain as I came off anesthesia earlier and I didn’t know I had to ask for pain meds after the c-section.  I thought I was supposed to tough it out…Well needless to say, when I attempted to sit up I was in lots of pain and when I lifted my weight off the bed, it felt like a truck hit me and I fell back on my butt and was shaking.  It took a whole day to get the pain managed (after my mom told the nurse off–which then made the nurse our favorite nurse!)  Anyway, my pain still wasn’t completely managed at the time of his bath but I made it there and stood under that hot lamp and gave my baby his first hair wash! It was worth all the pain in the world.

Day 50 in the NICU: Summer Solstice

The all day process of getting in a crib!  The nurse had to go into storage for it even though they prefer babies that are on as much breathing support as Silas was on, to stay in an isolette. He pretty much demanded to be out of the box by screaming and sweating on the lowest settings!

Silas has had a very eventful week. He has had so many echo’s and blood tests that has led to a blood transfusion. Then an infection (uti) has led to more tests, pricks of every kind… Spinal and urethra catheter :0 And so many IV’s. He is getting better but he now has a scalp IV. praying this one doesn’t blow. Today marks him having poops again since feeds have been reintroduced a few days ago. Once the uti is gone we will be going back to attempting to lower cpap settings (possible steroids). 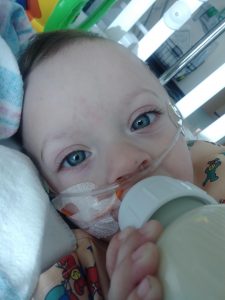 Zoning out at my sick son who then had a blood transfusion, lumbar puncture (to rule out meningitis), 2 catheters and a uti (e.coli) that was making him septic…Thankfully it stopped with no further complications.

Silas is now 5 pounds and double his birth weight! He started steroids this week and we got a private room.

Silas is 100 days old! Weighing 7lbs! The steroids have gotten him off high flow and now on low flow which means we finally got to breastfeed! He received 38ml in 15min! Baby boy is thriving in his private room. So fortunate to be able to be here so much now.

Silas went downstairs for the first time to get his upper GI study done in preparation for his g-tube surgery the following week. Well we didn’t go through with it as he turned a corner that weekend and started taking bottle/breast fully the one shift he was allowed to do so, breathing better, tolerating feeds and not vomiting. So I didn’t feel he actually 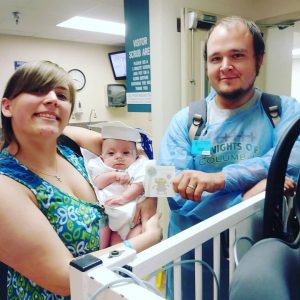 needed it. His breathing didn’t worsen and his echo’s looked fine. He has gotten so much better with feeding that we were getting ready for discharge until they gave him immunizations, changed fortifiers, and changed his blood pressure medication all in the same day! He started vomiting because they put him back on hydradrylazine and he had rejected the fortifiers so much that he stopped wanting a bottle at all!! We had to convince him we were giving him plain breastmilk. So we dodged nipple aversion and possible g tube again!  He was taken of hydradrylazine and is on microlipids.

Silas’ celebrated his NICU graduation after 148 days! 2 lbs, 6.9oz to 8 lbs, 14oz and home on the lowest oxygen requirement! 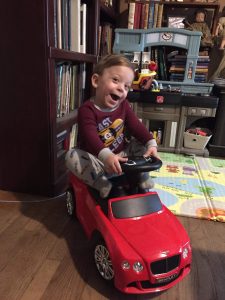 Silas is turning 2 and we are incredibly proud of our amazing little warrior.