Bryce Masaru Roberts was born at the gestational age of 27 weeks, 4 days, but also 3 weeks IUGR which is short for 3 weeks behind. So in reality Bryce was more like 24 weeks. He 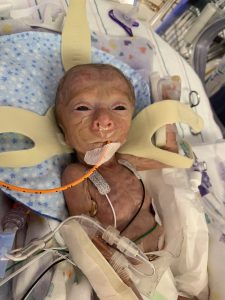 was 1 lbs, 4 oz and 10 1/4 inches long. From the day he was born, Bryce has been fighting for his life. Proving the desire to live is something you are born with and deservingly he was nicknamed “Tiny but Mighty”. 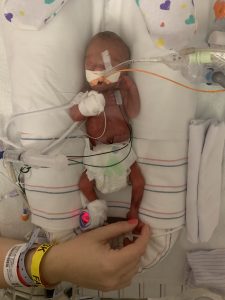 The entire pregnancy was complicated, from low amniotic fluid to reverse flow in the umbilical cord pausing during beats to going backwards.

Bryce was delivered via emergency c-section after not being able to find his heartbeat during 24-hour monitoring. Upon his birth, the umbilical cord was wrapped twice around his neck and he had an initial APGAR score of 3, later turning to 7.

He spent over 3 months in the NICU, and was transferred twice to a level 5 NICU. The first time was for the hole in heart heart, and the second time was due to a severe jaundice condition that they couldn’t get under control.  (His team believed he might have an issue with his liver and would need a transplant).

Thankfully the medical staff at Loma Linda Children’s Hospital were able to figure everything out and Bryce didn’t require a single surgery for those two conditions.

Bryce made it through, beating all odds! We were constantly told to spend every second we could in the NICU and to take as many photos as possible because his odds weren’t great and the doctors weren’t optimistic. 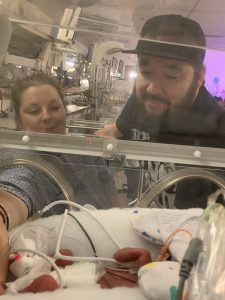 Bryce is now going to be 2 in June and is doing great!  He’s gone from being below the growth curve chart to catching up on height.  Weight-wise, he’s still a bit small, but he’s very active! Always on the move! He’s got the most stunning blue eyes. 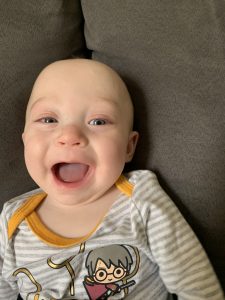 Also, we no longer have 8 different doctors leaving only a handful now.

Through all of this, it’s shown us how important it is to remain positive, even during the toughest of times. It has also taught us how important support is. During our stay in the NICU, we always tried to help others and teach them the “tricks of the trade” but felt like it fell on deaf ears. With this in mind, an idea formulated: Keep a look out for a book that I am writing to try and help others during similar times.