KINGSTON JACKSON GARZA
“Unlike anything that’s been seen: A True Miracle” – Kingston’s Mom

During my third pregnancy, I received nothing but bad news. A genetic counselor asked me if I wanted to terminate my pregnancy because my baby most likely wouldn’t make it. We discovered around 20 weeks that he wasn’t getting enough oxygen due to a reversed diastolic flow. Because of this, he was growing very slowly. By 27 weeks, he was measuring 4 weeks behind.

The day Kingston was born, I didn’t know if he was alive. I didn’t hear him cry. I didn’t see him. I just remember them saying “Congratulations! You aren’t pregnant anymore.” I was only 28 weeks. Bad choice of words. I was left in the OR and all I could focus on were the bright lights and how cold it was. My husband had followed our son and the only 2 people in there with me were talking about a bill they had to pay but didn’t agree with….

16 hours later, I saw my baby boy. I didn’t know what I was going to walk into. There were tubes everywhere, he was in a plastic box. I felt so many stares burning through me. I 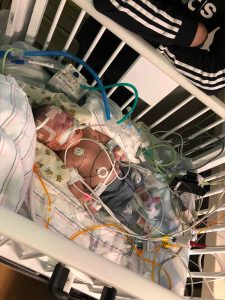 heard so many apologies. Right then and there, I felt guilt like never before. So many alarms, so many interventions. I couldn’t hold my baby. He couldn’t open his eyes. He couldn’t cry with that huge tube in his mouth. Blood transfusions at hours old, medication after medication, blood draws, pokes, the blue light. Another cold room. So many babies fighting for their lives but none as small as mine. None as sick as mine. Doctors and nurses talked amongst themselves. All they could say was “We’ve never seen anything like this.” Another bad choice of words.

After only 18 days, I got a call from the doctor saying Kingston had to go to a level 4 NICU. He wasn’t doing well and there was nothing else they could do for him. He was taken to Loma Linda Children’s Hospital. An hour and a half away. As the transport team was getting everything ready, I heard a lady say “I’ve never seen anything like this before.” I was beginning to question that. What was so odd about my child? I can’t remember if it was the first or second night he was there, but that was the night I realized just how serious things were. My son stopped breathing for the first time right before my eyes. All the bright lights were turned on, a whole team of doctors, respiratory therapists and nurses rushed in. I don’t think I’ve ever felt fear like that in my life. I cried uncontrollably as I held on to my husband begging him to tell me Kingston was okay. The whole episode lasted about a minute and a half but if you’re a NICU mama, you know that felt like a lifetime. After the lights were turned back down and my baby was stable, my husband whispered in my ear “Lets go so you can fix your make up.” Maybe not the best thing

to say to most NICU moms but to me, it was exactly what I needed to laugh a little and forget about how scared I felt.

On December 20, 2019, Kingston was transported to Kaiser in Fontana. By this time, he had already undergone 2 surgeries. The first was a PDA ligation in hopes to help heal his lungs. The second was a tracheostomy. After many failed attempts to extubate, it was clear that he needed a trach. I didn’t want to accept it. It scared me so much! How was my son going to live with a hole in his neck? How was I going to be able to take care of him? So many questions, so many doubts, I just didn’t want to face it. After talking to a whole group of trach mamas, it didn’t feel as scary anymore. I came to terms with it and for the first time ever, I saw my baby’s face with no tape or tubes. He was absolutely beautiful.

Our NICU stay at Kaiser was only 2 and a half months. This is where he had his third surgery: a G Tube. I think with any surgery that is put on the table, our first reaction is NO! My baby doesn’t need that! But it was clear he did. He continued to improve as time went by. Before we knew it, the PICU team came to talk to us about our vent training. We had to learn to change his trach, suction, do trach care and of course, understand the ventilator. We felt ready. We wanted to take our baby home. They said anywhere from 4-6 weeks!

We moved up to PICU! We felt so welcomed there. Everyone always made sure we were taken care of. Kingston didn’t adjust so easily. He needed a little bit of time to be comfortable. We wanted to begin our training right away so we wouldn’t be there for too long. We got comfortable suctioning, doing trach care and changing his trach. Next was our vent training and out of nowhere, Covid hit. That spiraled out of control. Our training was put on hold, my husband and I couldn’t see our son together. They were only allowing one parent at a time and what’s worse, our son got sick. Very sick. The day of discharge is when he got sick. I felt like my world came crumbling down. We went from almost going home to having our son medically paralyzed and sedated. We didn’t understand what had happened. We were so upset. I felt like all the training I had completed was for nothing because I couldn’t help my son. 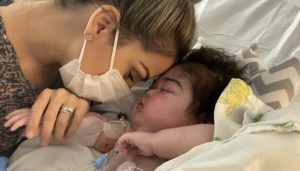 Month after month, meeting after meeting, contemplating taking him across country to another hospital where they specialize in BPD babies, dealing with the stress and fear the whole world was feeling, hitting walls and not having any answers as to why Kingston wasn’t getting better, all doctors could say was “He just needs time to grow.” I couldn’t stand it. 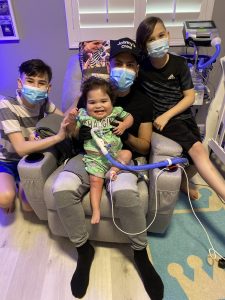 That wasn’t good enough for me. October 2020, the team decided he needed to be paralyzed for 2-4 weeks to help his lungs heal and grow. Those 2-4 weeks turned into 4 months! We had to celebrate another round of holidays and birthdays in the hospital with our paralyzed baby. As crazy as it sounds, this became the norm for my family. We would visit our son for a few hours and then drive back home to our other boys. I don’t want to say it got easier, we just continued doing what I believe any other parent would do. We were just living.

January 23rd, we got the best news, Kingston was finally off the paralytic! After that, he just started getting better. We slowly got off the sedation drips, his x rays were looking better, his scopes were also better. His tracheomalacia was pretty much gone, he was off the hospital vent and on the home vent. We resumed training after 13 months of not having any answers. Yes it took almost 2 years to leave the hospital but once Kingston turned that infamous corner, it all took off from there. My husband and I felt more prepared than ever to bring him home and finally, after 677 days, we were able to do just that! We did our last round with the medical team and to go from “I’ve never seen anything like this” to “He’s truly a miracle baby.” is nothing to take lightly. This little boy fought and fought and that same fight he has in him is what’s going to take him to places we can’t imagine. As his mother, I can’t be more proud of my little boy. Having him home has been simply amazing.

Thinking back to everything we’ve gone through, not knowing what was going to happen to our son, praying to God daily for strength and even 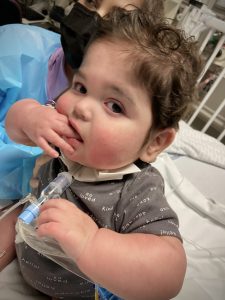 accepting that he might not stay on this Earth with me, having the same fear the whole world was feeling in 2020, there’s no doubt in my mind that I couldn’t have done this without God. Prayer is powerful. I’m so happy to announce that we get to celebrate Kingston’s 2nd birthday on July 24th right where he belongs: at home!