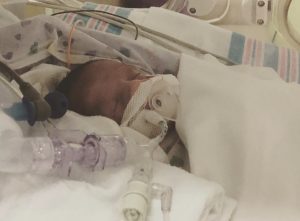 Dominic Martin Hernandez was one of the biggest surprises I never knew I needed. Our story is a little unconventional compared to others’ but when I found out I was 12 weeks pregnant, I had to face a few challenging decisions.

Truth be told, I didn’t want kids. I didn’t want to be a mother, nor did I want to be a single mother given the way Dominic was conceived. By the time I made my decision to parent, I was already 22 weeks pregnant. I was finally starting to get excited about having a baby. While telling all my friends and family, Dominic’s timer went off and he wanted out of the oven!

At 26 weeks, I was starting to feel “off.” I had mild cramps and was extremely lethargic. These symptoms went on for a couple of days before I began to worry. By the 4th day, the cramps had intensified and I began to bleed. I was rushed to the ER thinking I was having a miscarriage. For a quick reference, I was considered a high risk pregnancy only because of liver issues I had in the past but since my OBGYN and gastrointestinal doctor were working closely together, I was expected to have a normal and safe pregnancy.

Once I was admitted into Labor and Delivery I was told those cramps were contractions, which completely blew my mind because I knew it was way too early for me to be in labor let alone experiencing Braxton Hicks. Luckily my OBGYN was already en route to the hospital and took no time to see what was going on.

When she arrived and was able to check me, I was already dilated to 3cm. Terrified that I was going to deliver that day, she made the decision to transfer me to a hospital in the city with a Level III NICU. Within hours, I was rushed and held in Labor and Delivery at Rush University Medical Center in Chicago, Illinois waiting patiently for my contractions to stop after being given a series of medications that I can’t even recall the names of.

After 13 hours in Labor and Delivery, and getting the contractions to stop, I was moved to a room on the maternity floor to await what would happen next. The next morning I was met by a team of OBGYN specialists and the NICU team about what would happen if I were to deliver early because I wasn’t out of the woods yet. Being dilated and my water not breaking ran a risk of problems they had to keep an eye on. The goal was to keep me in bed and in the hospital until I was at least 35 weeks and if everything went well they would induce me to deliver. 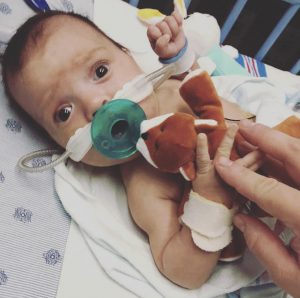 Unfortunately Dominic had other plans and after 5 days in the hospital he decided to make an appearance at 5:22 am on October 15, 2017 at 2 lbs 7 oz and 15 inches long via emergency c-section.

Dominic was rushed out so quickly I had no time to ask questions; Was he alive? Was he breathing? Was he okay? How big was he? Considering the father not being involved I was entirely alone facing these experiences and challenges. Luckily my father, and one proud Grandpa, was there by my side as I delivered and was able to sneak a peak a few minutes while I was being closed up. He came back in tears saying Dominic was stable and was one beautiful baby boy.

Although I was congratulated and told this was supposed to be the happiest day of my life, I didn’t feel like celebrating. Words can’t describe how terrified I was knowing the road ahead or the extent of Dominic’s prematurity.

The first night I spent so much time trying to rest and pump since I wanted to breastfeed but couldn’t. I kept calling down to the NICU to see how Dominic was. He was stable, on 100% oxygen and intubated…I wasn’t sure how my heart could take seeing him so small. I felt so helpless knowing and feeling like I failed him.

After the first week of Dominic’s touch and go status and being able to remain stable, I was finally able to hold him for the first time. It was the best feeling in the world! It was the very first time I ever understood what true love felt like. 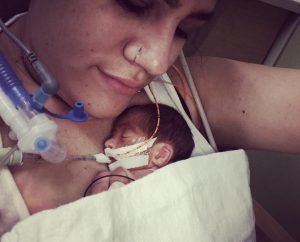 In the wake of being in the NICU for 137 days and facing the challenges most preemies have to face including several blood transfusions, a hole in his heart, jaundice, feeding issues and the tolerance of breast milk, various breathing issues and steroids to help with those issues, Dominic finally came home February 28, 2018. Things were looking grim around his due date that was supposed to be January 10, 2018 because no matter what, he was unable to get down to a lower setting on CPAP before moving on to the high flow nasal cannula and regular oxygen. He wasn’t able to tolerate it until just a few weeks before coming home and was told he may have needed a tracheotomy and gtube while being sent to a rehabilitation center while I learned how to care for him. Luckily that wasn’t the case, however, he still had to come home with a gtube, 4 liters of oxygen, and still monitored on a pulse ox machine.

Being a single parent, I am spending all my time by Dominic’s side learning and observing and making the hard decisions without a shoulder to lean on. I lost almost everything and had almost nothing but a crib to come home to. I never even had a baby shower or anyone to throw me one except a few old coworkers putting together a baby bath basket of diapers and a couple of outfits.

Those first few weeks home took a lot of adjusting and getting on board with following up for benefits, social security, pediatrician appointments , pulmonology appointments, and Early Intervention especially for speech/feeding because the main goal was to get him to take a bottle. I wasn’t able to go back to work and didn’t even feel like a real mother yet. I felt like a nurse and was constantly worried something would send us back to the NICU. 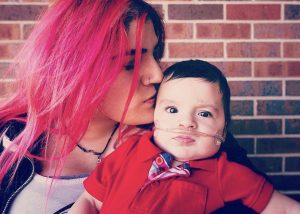 Now at 3 years old, Dominic has been healthy, thriving, and doing beyond well from how he started. Still a little behind on speech and suffering from some behavioral issues, he is academically advanced even taking interest in all things creatively and some sports. He is often called a success story by his therapists, teachers, and family friends. It’s amazing to think how right they are and how far he has come.

While the NICU is starting to seem like a distant memory, I can still hear the sounds of monitors beeping and intercom calls overhead, the smell of hospital blankets and sleeping in a bumpy recliner for months. It’s been an amazing journey watching my little 2 lb peanut blossom into a 35 lb toddler and already half my height.

As many times as I have told my story to strangers, friends, family, and doctors, the single most asked question I hear is, how did you do it? The answer is simple: Love. 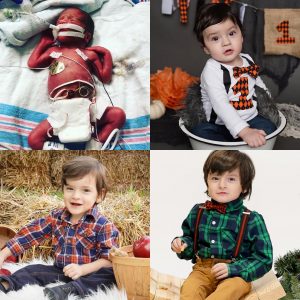 The love a mother has for their child is selfless, unconditional, and pure. We would do anything for our children and that’s exactly what I have done since the beginning.