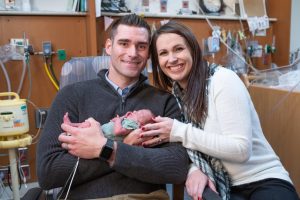 In 2019 we experienced preterm labor twice, PPROM twice, 3 NICU journeys, 79 days on bed rest, an emergency c-section, loss of our firstborn, bringing a preemie home, parenting after loss, and all of the emotions that come during and after these experiences.

My husband and I were married for ten years when we moved across the country for job opportunities. For years we were told it wasn’t likely I could get pregnant due to severe endometriosis. Shortly after our move in August of 2018, we were surprised and thrilled to learn we were pregnant with our first son, Carter. The first trimester was filled with nerves because we knew about the chances of miscarriage. Aside from some nausea, it was a picture perfect pregnancy. We thought we were “out of the woods” once the second trimester began.

On January 18th, 2019 at 23 weeks and 6 days, our world was turned upside down. I decided to go to the doctor because of increased fluid. I’ll never forget the look on my doctor’s face during the ultrasound. She put her head down, looked me in the eyes and said “Justina, everything is going to be okay, we need to get you to the hospital immediately. You’re 3 centimeters dilated”. Chaos ensued as Dan walked in the door and we were rushed to the hospital. I ruptured and was having a slow leak – our son could be born at any moment. The Neonatologist prepared

us for the low likelihood of survival if he was born over the next few days and we had to face the possibility of losing our son. Three and a half days of labor, magnesium, IVs, antibiotics, watching the monitor every second, all while my health was deteriorating. On January 21st, 2019 at 9:06pm, Carter Moore Oldehoff was born a micro preemie at 24 weeks and 2 days, weighing 1 pound 8 ounces and 12 ¼ inches long. Carter was born fighting for his life. He developed NEC, an intestinal disease, which was not repairable. After the most challenging, indescribable 74 hours of life, Carter took his last breath in his dad’s arms on January 24th, 2019 at 11:22pm. 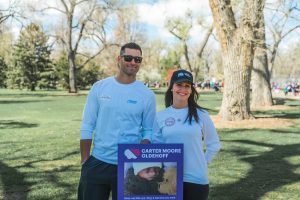 Three months after Carter passed, Dan and I were shocked and scared to find out we were pregnant again. We now knew what could happen and all of the possibilities that aren’t talked about when you become pregnant. The pregnancy was immediately deemed high risk due to an incompetent cervix and prior preterm labor. At 15 weeks I received a cervical cerclage and started weekly progesterone injections. We found ourselves living in a constant state of fear and anxiety, with our guard up trying to protect ourselves knowing we could lose this baby boy, too. Our fears became a reality at 18 weeks – my cervix started shortening. I was put on bedrest along with daily progesterone. Three weeks later, my cervical length was gone and funneling began. It was at this time we were having the difficult conversation with the neonatal team of the possibility of losing another son. We had many scares throughout these weeks and found ourselves at the hospital almost weekly. At 23 weeks and 6 days, I was admitted to the hospital, given the first round of steroids for our the baby’s lungs and remained at the hospital on bedrest. At this point, we knew he could come at any point but every single day that passed was a big milestone. At 27 weeks, my water broke and contractions started. The team started magnesium to help protect the baby’s brain, gave the second round of steroids for baby’s lung development, and started me on antibiotics. Thankfully, the contractions subsided.

Two weeks later, at 29 weeks and 3 days, I began to have contractions again but this time something felt different. After 15 hours of contractions, I spiked a fever and high white blood cell counts – I had the chorioamnionitis infection, the same infection we had with Carter. It was immediately decided the cerclage had to be removed – I was 4 centimeters dilated behind the stitch. We were rushed to have an emergency C-section. 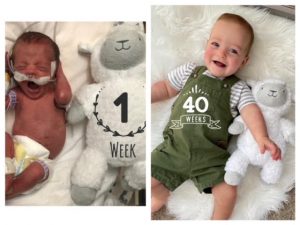 Fifty-eight minutes later, Aron was born on October 9, at 9:08pm, weighing 3 pounds, 8 ounces. After 36 days on home bedrest, 41 days in the hospital on bedrest, and 49 days in the NICU, we brought our son Aron home the day before Thanksgiving. After 7 days home, we found ourselves in the NICU for the third time in 12 months – Aron had RSV. After another traumatic experience watching him fight, we had our second homecoming a week later and now Aron is healthy, wireless and here with us.

was created in honor of our son Carter to support others going through the NICU or loss journey. Our hope is to help NICU parents navigate the difficult journey ahead, provide resources to parents who have experienced the unimaginable loss of a child and resources for family and friends who don’t know what to do for a loved one who has just lost a child. Carter’s Cause is being created to do just that and more. If we could hold the hand of everyone experiencing loss or the NICU journey, we would. 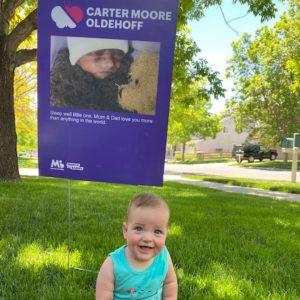