Our story started out like most, overjoyed that we were pregnant. Everything was going great, until it wasn’t.

At 20-weeks pregnant, I noticed my feet were swollen. I thought it was just a pregnancy thing but after a couple of days I called my doctor just to be sure everything was okay. My blood pressure was high so they ended up running more tests at the hospital and decided it would be best for me and the baby if they put me on bed rest.

I cried for what felt like days when I found out I had Preeclampsia. My doctor told me that our baby would most likely be a micro-preemie and would need to have assistance from the NICU. “A NICU? What is that?” I had NO CLUE what we were about to get ourselves into!

At 26-weeks and 5 days, our beautiful Virginia Jane came into this world. I couldn’t believe how small she looked. Virginia (Via for short), as we like to call her, weighed 1 pound, 3 ounces. Her length was smaller than a ruler at 11 3/4 inches. When I saw Via in the incubator for the first time, I broke down crying. I was mortified that this was my life. I didn’t know how to do this, or how to feel. 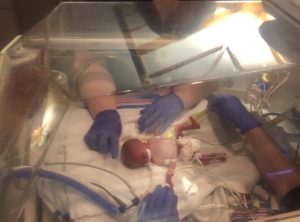 Day after day, she became stronger. She was gaining weight and tolerating what small amount of breast milk I could give. After a few weeks, they told us that a vast majority of preemies have what they call a PDA (Patent ductus arteriosus), and Via had it. A duct in her heart that if I could have stayed pregnant longer, would have probably fully closed. Her doctors told us that it was pretty large and may need to be surgically closed. This was another hurdle of the NICU life that we had to go through. I know at the time I was freaking out, but I knew that everything would be okay.

We were eventually transferred to Cincinnati Childrens, just down the street from the hospital where she was born. At just under 3 pounds, Via entered the cath lab, where they would try to go through her femoral artery to close her PDA. After hours of trying to close it, they finally succeeded. Usually for a PDA they have to break ribs to get to the heart to close the duct, but the surgeon told us that Via was the 17th micro-preemie in the nation to have a successful PDA surgery through the femoral artery. I was beaming with excitement. “Thank you GOD she got through this,” I thought. The next few days were crucial. If she does well, they would be a

ble to start weaning her ventilator in hopes to eventually take her to CPAP. Via did great for 2 days and then all of the sudden, she started to back slide. She declined over the next 2 weeks, developing pulmonary hypertension and a blood clot in her leg. She was on the highest settings on the oscillator. I couldn’t even hold my baby when she was at her sickest. It broke me. We prayed and prayed and prayed some more. Everyone we knew was praying for her. The doctors told us to start palliative care because they couldn’t do anything else for our sweet girl. I remember distinctly one of our doctors saying, “worst case scenario she dies. Best case, she gets a trach and is on a ventilator for a few years.” We didn’t even know what to think. We were devastated, but never once gave up. We decided to baptize her. I thought, “what if it is her time?” But I didn’t…I just COULDN’T believe that! Everytime I went to the bathroom, went to get lunch, or to get up to read her a book, I would whisper in her ear to prove them wrong. I told her that I believed in her and that she was meant to be here on this Earth for a reason. Somehow, by the grace of God and Via’s fight for life she started to do better. She was about 3 months when we were in the clear, but they still couldn’t bring her ventilator settings down. We discussed it with the doctors, and decided that we would give her a few more weeks to see if they could decrease the settings but if not, then we would move forward with the trach.

At exactly 4-months old, our Via had her tracheostomy and g-tube surgery. It was the best decision we ever made. It literally saved her life! She was finally able to lay on a boppy, to develop and move around. We were able to have play dates with physical therapy on the mat in the NICU. We were finally able to start weaning her off her vent. After 8-months in the NICU, we were headed to the training floor where we would learn how to do trach changes, take care of her g-tube and learn all things about the ventilator. Once she was on the home vent, and we found night nurses we were able to come home!

When Via came home almost a year ago in May, she was on the ventilator 24/7, she wasn’t eating any food by mouth, and she couldn’t even roll over! We were SO glad to have her home after 408 days in the hospital. It felt like she was meeting milestone after milestone once she came home. From rolling over, to sitting up…she was getting so strong. She just turned 2 in April and is so close to walking all over the place. She eats about one meal by mouth a day (the rest through her g-tube.) Via passed her sleep study and has been vent free for almost a month now! She loves babbling with the help of the passy muir valve (PMV) and has even said “mama” and “dada!” We are so incredibly proud of how far she has come, and how much resilience she has! It’s been such a long journey for us, but has proved time and time again just how strong we all are. 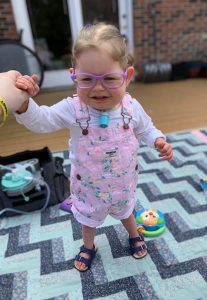 If you’re struggling with some of the same things we went through with the ups and downs of the NICU rollercoaster…I am with you. I feel you, and I am praying for you. Listen to me when I say, it is all going to work out the way it’s supposed to. I know it’s hard to see your little one(s) in pain, and hooked up to machines. I know you feel like this is the worst thing that could have happened to you. I also know how amazingly strong you and your child are. Growing and developing are not linear, but your baby can, and WILL get there. Keep showing up, and never give up!