Preemie Story by: Mum, Alexandra Xenitopoulos- @Thereallifeoftwins
“Remind yourself to enjoy the journey because the days are long but the years are short.”

I have found it really cathartic to share my journey with other Preemie mums. To finally be able to recall all the feelings that I just pushed to the side because crazy NICU life got in the way. Just when the NICU days were over and I thought I would have some time to relax and reflect at home, the reality of having newborns kicked in and all I had time to think about was washing bottles, expressing, getting my babies to latch, reflux, dairy intolerance and lack of sleep.

All of a sudden I was 6 months down the line and realizing that I hadn’t had time to heal from what I felt was such a distressing experience for me. We have now reached 10 months and suddenly I am finding myself using quiet moments like this to reflect on our journey thus far.

Whilst not the same for everyone, I think what was so shocking for me initially were the first hours and days that followed the birth. I’m usually quite a “go with the flow” kind of person but even for the most laid back ladies, what ensues after birth is a smack in the face. Firstly, I was booked in to have my C-section at St.Vincent’s Private hospital with my obstetrician Dr. Briohny Hutchinson at around 36 weeks. However, Briohny advised me that I would need to have an emergency C-section instead. As I had not met the criteria to deliver in the Private hospital where I had been staying, I was rushed to a public hospital where Briohny was able to still deliver. There were a few reasons for my emergency surgery; Aria’s placenta was calcifying; I had been diagnosed with preeclampsia three weeks prior at roughly 29 weeks and the night before my C-section I was having severe pain in my abdomen which I later found out was due to abnormal liver function. As my C-section occurred at 31+ 5 weeks it was a case of getting them out, giving a quick kiss and off they went to be looked after in the NICU. At birth, Aston weighed in at 1.6 kilograms and Aria was 1.3 kilograms.

Following the surgery, I was taken to the HDU so my blood pressure could be monitored carefully. Unfortunately, due to my blood pressure I wasn’t able to see the twins for almost two days. I was constantly wondering where they were being kept? What it looked like? How they looked? If they were okay? What the doctors were saying about them? Would they notice me missing? Would my absence impact their health? Questions were constantly filling my mind with stress. When I was well enough to manage a shower, I was told I could be taken down to meet them so away I went. I was rolled down the long corridors where posters on the walls told stories of hope, stories of the tiniest babies beating all odds. Through the doors to a place with hundreds of babies all lined up. Where were mine 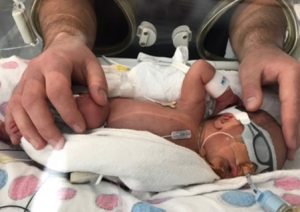 being kept, I wondered?

During this time, your partner becomes more important to you than ever before. Archie became my eyes and ears. He was there with the doctors every morning when I couldn’t be, he held me up when I couldn’t stand, comforted me when I couldn’t breathe, encouraged me when I struggled and became the only other person who I could truly relate to. He was my positivity, my soundboard and my number one supporter. He was unselfish, always putting the health and safety of myself and the kids first. Archie, would ask about how I was handling everything mentally and check in with me often, all while going through this himself. Support was key for me and it is important to reach out. Whilst some days were beautiful, others were brutal. That guilt and self-blame can eat away at you.

Nothing, and I mean nothing, can prepare you for seeing your baby in NICU. It hits you like a ton of bricks. It’s devastating, but in between the moments of devastation there are beautiful moments where you smile, even laugh and feel your heart fill with pure joy and unconditional love. There are moments you feel proud and moments you use all your strength not to crumble when watching your baby fight their battle beside you. You can never see the end of the journey, or imagine leaving the hospital with your child – it just seems like a dream that is so far away and having to leave your child behind is a nightmare. 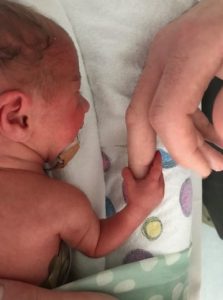 Having premature multiples also added more difficulties to the experience. Whilst Aria had been the twin under more stress in my womb, she was the one who was able to cope better after birth. She was breathing on her own from the get go and managed to stay pretty consistent throughout her NICU stay. Aston however, was kept in a completely different section down the other end of the NICU. I was constantly torn. When I would sit with one baby, I would worry about the other and vice versa, often leaving me feeling guilty. Aston was a little more unpredictable, he needed breathing support and required lots of phototherapy. At one point, Aston finally became well enough to breathe on his own and join his sister. I was elated- it meant that for the first time I could see and cuddle them both at once. Unfortunately, that elation did not last long, only four hours and then he was taken right back down to the other end again. We were constantly on a roller coaster of emotions.

Upon returning to your room after the NICU visit, an overwhelming sadness is felt as you can hear other mothers comforting their babies in the room next to you. The sudden feeling of separation leads to an immense pain that you can’t imagine. The beeping sounds from their monitors still echo constantly in your mind, even after you have left them. You can’t sleep because all you long for is to hold your babies. The guilt, the jealousy, the anger, the sadness and the feeling of failing. Failing to keep your babies safe and growing inside of you. You never really get over that. When comments like “it was out of your control” don’t help and hearing things like “it will be okay” just brings you no comfort because how the hell do they know? Nobody really knows. You are just hoping for a miracle. 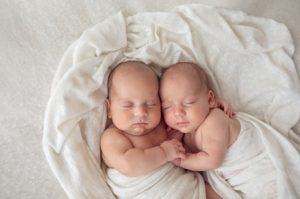 The worry you feel in the pit of your stomach when that phone rings because you are either about to be told that they are taking one step forward or two steps back.
Babies are not meant to have such a traumatic beginning to their lives. As a parent you are meant to reflect and fondly remember having your children and those first moments when they lay on your chest. That special bonding moment, that moment when you are proud of yourself, proud of your body and what it has achieved and in awe of your perfect family. I grieved the loss of a normal birth and so many precious newborn moments. I cried every single day, every time I walked over and saw them lying in their incubators, it broke my heart and I was responsible for it – it’s an indescribable pain. They were meant to be at home with me because no one can ever love your children as much as you do, they belong with you.

After two weeks, both Aston and Aria were well enough to be transferred back to the SCN at St.Vincent’s private – which was the original hospital we had planned to give birth in. We wanted this move to happen as we had been staying at St.V’s prior to giving birth. I was familiar with the hospital, the staff and the SCN consisted of only 12 beds making it small and intimate. The twins would have the same doctor caring for them and communicating with us on a daily basis. Whilst our experience of The Mercy hospital was great, we really valued the consistency of care in a smaller environment that was less overwhelming.

Days spent in the hospital were exhausting, pumping felt unnatural and private moments with your children were non-existent. You get home, you shower, you eat, you sleep and the next day you repeat. You spend so much time worrying about your babies that you forget to worry about yourself, you completely lose yourself. Who are you? Who have you become? You are lost, lost in worry, lost in exhaustion and lost in guilt and pain.

The experience of being a NICU mum is something that will always stay with me. In fact, to be honest, I think about it every single day, every time I am rocking one of my babies to sleep at the end of a long day all I can think about is just how lucky I am. Lucky to have my two little healthy miracles that I waited so long for at home and now in my arms. Lucky to have them here, earth side. I picture the moments I would watch them in their incubators, wires and tubes coming from everywhere and then I look down at them in my arms and just reflect on how far they have come. I look at them in amazement and I feel so blessed it hurts.

I am eternally grateful for the 41 days of care that my babies received from the nurses and doctors that were responsible. Many of which brought me comfort during a difficult time for me. I remember their faces and the conversations and words of reassurance they gave to me. In particular, one nurse who noticed me upset one morning and said “You are so lucky because now you get to watch them grow on the outside”. Those words really got me through some difficult moments during our stay. 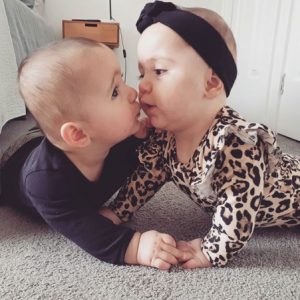 I strongly believe that because we had such a difficult path in the beginning, we love our kids that little bit harder and we are grateful that little bit more. The NICU experience gave me so much heartache but brought me so much inner strength. It changes you forever.