“Your baby is not receiving enough oxygen, we’ll be lucky if you make it to 32 weeks.” Words no pregnant woman wants to hear. I had so many questions but couldn’t get the words out. This was my third pregnancy. I never had issues with the other two, so why was this happening now?

I was 20 weeks when I heard these words. I started seeing a specialist every two weeks. By my 27th week, I was admitted to the hospital and was told I wasn’t going home until I had my baby. 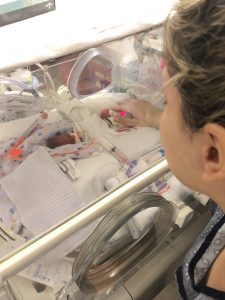 Every night the nurse would come in and put an oxygen mask on my face because my baby’s heart rate would drop. They gave me steroids to mature his lungs. I was also given magnesium which made me feel like I was dying. By the third night, my doctor came in and said I would have to get a c-section because delivering vaginally would be too risky for my baby.

By the fourth night, the nurse came into my room to tell me I was having my baby that morning because his heart was decelerating too much. I began shaking uncontrollably. I was terrified. Having a c-section was one of my biggest fears. The morning came and doctors decided to wait. It wasn’t until the seventh night a little after midnight that doctors decided it was time. I wasn’t afraid of having my baby early. It never crossed my mind that he wasn’t ready. I knew nothing about having a premature baby. Doctors don’t mention any of this while you’re pregnant. All I could think about was…am I going to die having a c-section? Sounds silly, but that’s what I was the most afraid of. My husband was home with our older boys when I was told I was having my son in less than 20 minutes. He rushed to the hospital and made it right on time. I remember going into my own world. I focused on a black dot on the ceiling. I didn’t want to move. I didn’t want to blink. I couldn’t hear anything. I didn’t hear my baby’s first cry. I snapped out of it when the doctor asked my husband if he wanted to see our precious baby boy. We stared at each other and I asked him if he was alive. As soon as I asked, I heard the most beautiful sound, my baby’s tiny cry. Next thing I know, my husband is leaving with everyone, including our son, while I’m left in the operating room feeling empty. The last thing I remember hearing before I fell asleep was “Congratulations mama, you’re not pregnant anymore.” Again, words you don’t want to hear when you’re only 28 weeks. 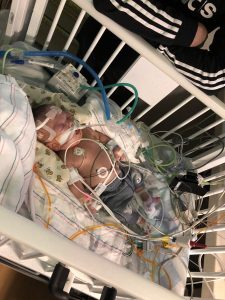 For a quick second I didn’t notice the breathing tube or the machine he was hooked up to. I just saw my precious miracle. Nothing else mattered. I felt no physical pain, but my heart was in pieces. That’s when I realized he couldn’t breathe on his own. He was so fragile. I couldn’t touch him, much less hold him. There were nurses all around and everyday I was reminded by them that they were growing my baby because I couldn’t. I began to feel so much anger. Worthless. Was my baby taken out on purpose? Was he an experiment? I hated the fact that I couldn’t touch him. I was mad at everyone. Especially at myself. I didn’t want a boy. I felt pressured into looking perfect because everyone felt like they could call me fat. I took my pregnancy for granted. And these were the consequences. I had to watch my micro-preemie fight for his life through an incubator. I felt a sadness that was unbearable. Every second I was afraid my baby’s heart would stop beating.

I have felt every emotion you can think of, sometimes all at once. I saw things I never thought I’d see. I’ve cried more than I have ever cried. I’ve felt weakness. I’ve felt defeated. Every step forward came with five steps back. My faith has been tested. My positivity has taken a back seat way too many times. Watching your baby flatline will bring you to your knees and hang on to dear God. At that moment, I felt closest to Him. I asked him a million times to not take my baby. I promised I would be a better person if He gave Kingston another chance. All the lights were turned on, all the alarms were going off and about 15 people rushed to his bedside but just like in the operating room, I heard nothing, I felt nothing. I just prayed and stared at the screen. The line went from straight to squiggly. My baby was back and somehow I felt it all. I had to vomit, I was about to pass out. I looked around the room and found my husband in a corner with tears running down his face. I walked up to him, didn’t say a word, we just held each other and waited until everyone left the room. Then we walked up to our baby and thanked God.

As days turned into weeks and weeks turned into months, I felt a change. I’ve become happier and stronger. Kingston has been my biggest inspiration. He made me face all my fears. He has made me a better person. I don’t take the little things for granted anymore. The bad thing about carrying a smile on my face is that people forget that I still don’t have my baby home. I still worry about him. If he gets disconnected, he won’t survive. I’m se 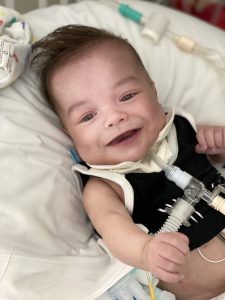 en as this strong person who has it all under control when in reality, I’m just trying to keep my head above water. There is nothing easy about having a baby in the NICU for seven months and counting while having two other boys back home that I don’t get to see everyday. I know one day this will all be a memory and I’ll be able to tell my son just how amazing he is and how proud I am to be his mother. In seven months, Kingston has overcome more than the average person will ever overcome in his or her lifetime. He has fought many battles all while having the cutest smile on his face and that is the true meaning of being Kingston Strong.