In the May edition of our Preemie Family newsletter we learned about preemies William Thomas Conley & Aaron Lawson Conley who were born at 25 weeks and 5 days and weighed just under 2 lb. and spent 93 days in the NICU before coming home.  Read more in an update by their mother, Helen Conley. 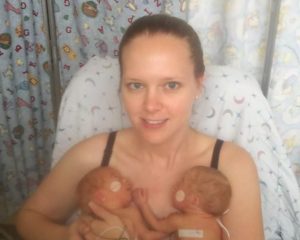 The morning that the boys were born, I thought they had felt like they were fighting each other throughout the night.  This wasn’t my first rodeo.  We had a 3 year-old daughter, and I definitely did not think that I was in labor at 25 weeks, 5 days.  I made it into work around 8, then started feeling contractions and took myself to the hospital;  William came shooting into the world by 9, and Aaron pushed his way out about 30 minutes later.  Life has been non-stop since then. 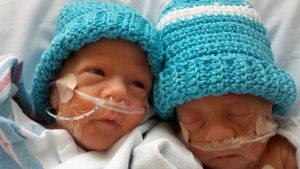 The NICU days were rough.  As anyone who has been there will tell you, it’s a roller-coaster.  We had days when we thought they would come home well before their due date, and days we weren’t sure that one or either of them were coming home …ever.  There were other issues as well, but the biggest concern was IVH for both of them:  Aaron had a bilateral grade 4 brain bleed, and William a 2/3, with PVL. We had behind-the-curtain talks with the doctors about everything they probably wouldn’t be able to do when they were bigger, based on statistics for their issues.

I did start a blog to keep friends and family informed – I was too emotional to talk about it most of the time, but didn’t want them to be in the dark.  The blog details our NICU stay, and I hope that it’s helpful for others who are going through similar situations (http://conleytwins2011.blogspot.com/).

Life after the NICU was the light at the end of the tunnel – it was freeing and yet hectic, trying to manage our family of five with daycare for my daughter, work for me and my husband, and at-home care plus the slew of doctor appointments for the boys. We started receiving early intervention right way, and worked with them both on some tightness issues and meeting the initial milestones.  We had a ton of support from our family, church, friends, and coworkers. 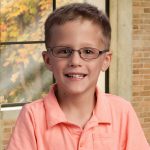 And now?  They are AMAZING little boys who didn’t listen to anything the doctors said they wouldn’t do.  They are in Kindergarten and, for the most part, right on track with their peers.  We were recently told that William does have some amblyopia in one eye due to the strabismus, but we’re hopeful that patching will get his vision at least close to 20/20 (with the glasses).  Otherwise, they have no issues with gross or fine motor control, which we had thought would be a lasting impact, and no cognitive delays. 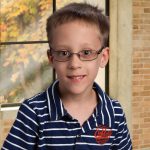 They play soccer and took guitar lessons for a few months, and are learning to read.  I feel thankful and blessed for their progress and learned along the way that stats are just that – numbers.  William and Aaron are not numbers 🙂  They are super curious, always-on- the-go, in-your-face, loving, and talkative little boys; and they are lights to all who meet them.