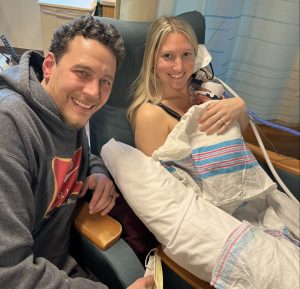 “Although he is small, he is mighty” – Sheri Bertero

Leon wasn’t due until March 3rd, however on November 28th, contractions started at 9pm. This was the first pregnancy that resulted in labor, so what was thought to be Braxton Hicks turned out to be actual labor. After one hour of contracting every ten minutes, a phone call was made to the Doctor, and we were instructed to come in for a check up. We arrived around 11pm and were rushed up to labor and delivery.

The Doctor confirmed I was already 5 cm dilated so they attempted to slow it down, and were hoping to stop the labor. Leon had other plans. Turns out the placenta had developed an E. coli infection and Leon knew it was no longer safe, so he had to get out and get treated for the infection.

Leon was born at 3:26 AM, which was so fast I didn’t even have time for an epidural!
His first few days were great. He was breathing on his own and doing so well for only 26 weeks gestation.

On day four, Leon started to show signs of infection, and went downhill fast. He tested positive for an E. coli infection which later developed into meningitis. When he started to seizure, they did ultrasounds of his head which 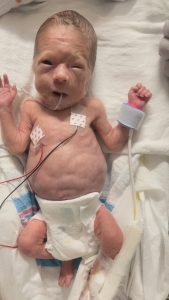 showed he had a stage three brain bleed. By the end of the day, the doctors were afraid he wasn’t going to make it and told us to have all his grandparents come to meet him in case this would be their only chance. Leon was very sick but fought through his infection. He was very weak and tired over the coming days but he made it through. He was able to come off his ventilator and mom finally got to hold him on day fourteen. His blood test showed no growth of the infection, and they hope at the end of his treatment he will have a full recovery.

Leon’s next hurdle is a heart murmur that they have also seen progress over the past few days.
Leon is a fighter, and will continue to grow stronger over the next couple months he has in the NICU. In the meantime, his mommy will continue to advocate for him and enjoy holding him for as many hours as she can each day.

Take every day one day at a time. You will have good and bad days, but keep a positive attitude and have faith that your baby is stronger than you think, and so are you.

Leon has been in the NICU for 37 days now. He is no longer receiving phototherapy and has graduated from cpap and has had his first cuddles with mom!