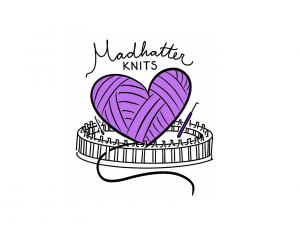 Madhatter Knits is a non-profit organization dedicated to supplying knit hats for premature babies in the Neonatal Intensive Care Unit (NICU). Our goal is that critically ill infants and their families in the NICU will receive our love and support through their fragile beginnings. We are dedicated to providing love and support to critically ill infants and their families by knitting our love to these tiny and fragile beginnings. Since our founding in 2014, we have been determined to make an impact on the community of NICU babies and their parents. Madhatter hats help maintain a baby’s body temperature by reducing the amount of warmth that escapes through the head. In addition, our knitted hats become a story to each family as they are symbols of comfort and hope for parents and their little miracles. Madhatter’s hats give the preemies and their parents security, warmth, and comfort through difficult times. Each individual hat that you knit will make an impact on the preemie and will be a treasured keepsake.

Madhatter Knits was founded in 2014 in Los Angeles, California by Christie Huang, Kathryn Huang, Tiffany Chang, and Kimberly Chang. The inspiration to establish Madhatter Knits sparked when Tiffany Chang’s fourth-grade teacher, Mrs. Halferty taught Tiffany the art of knitting every recess. Tiffany was so thrilled on acquiring how to knit a hat on her own that the very next day, she proudly demonstrated it to her sister, Kimberly and her two cousins, Christie and Kathryn Huang. Christie Huang, who was volunteering at the San Gabriel Medical Center, had just visited the NICU around the same time Tiffany was learning how to knit. Tiffany’s first trial gave them the inspiration for the founding idea of the organization. It was the perfect size for a preemie’s head! Each of them committed to knit hats from that summer on and made their first donation of 160 knit hats Christmas of 2014 to the Children’s Hospital Los Angeles. With the mission to give preemies and their families love, warmth, and support, Madhatter Knits was born.

The hats were so well received that they decided to make something more out of it. All four of them decided to create Madhatter Knits to invite and train volunteers to knit hats for preemies. The founders began to grow a network of devoted volunteers together to help make a difference for premature infants and foster support to their families in feeling their love, warmth and comfort during their difficult times. Madhatter Knits hopes to give the gift of hope for parents, as milestones for growth, or as remembrances of knitting their love to tiny beginnings.

Madhatter Knits continues to expand and deepen our impact in the NICU community. If you would like to learn more about us or join us in spreading our mission, feel free to reach out to us. You can follow our Instagram (@madhatterknitsfoundation) and Facebook (Madhatter Knits).