This blog post made possible by Sage Therapeutics, Inc.

I was crying uncontrollably in front of my computer screen as I watched a video my father-in-law had made of my newborn daughter. Night after night as my daughter lay in the NICU, I was at home watching that video with my hormones on overdrive. I just assumed it was typical
postpartum emotions. I had no way of understanding that this was bigger than that. Yet I had no framework to help me figure this out. I wish I had, because it would have saved me 18 months of agony.

It was in early September in 2003 at 11:50 p.m. and my husband, myself and the entire labor
and delivery and neonatal team cheered as Becky was born with a tiny but fierce kitten cry at 2 lbs, 15.5 oz. My daughter was held up to me and my 30-weeker girl looked as surprised and
exhausted as I did. Then she was off to the NICU with my husband in tow as I stayed behind
for post-birth matters. The birth happened so fast that my doctor wasn’t even there for it. She
came in as I was cleaned up and apologized. I was just relieved everyone and everything
seemed okay after what had been a rocky 30 hour bed rest after my water had suddenly broken
in the car on a day trip out of the area.

A short time later, I woke up from a drugged stupor as I was pulled into the Neonatal Intensive
Care Unit (NICU). Gregg, my husband, had asked for me to be wheeled down there to see our
daughter. Labor weary and overwhelmed with it all, I took in my daughter on the warming table.
I heard alarms blaring as she cried with all of the tubes and wires attached to her. Then as fast
as I saw her, I was whisked away to my room to “rest.” Did I rest? Even as I felt the exhaustion
taking over everything, my sense of worry fought it off. I feared my daughter needed me and if I
slept I would lose her. I knew I was losing the battle and so said a silent prayer to God and to
my daughter’s namesake (my late grandmother) to watch over her for me while I rested. Then
everything went black. 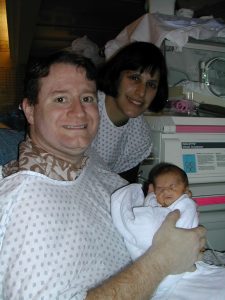 The next morning my husband took me by wheelchair to the NICU to visit my daughter. As I got to touch her for the first time through the portholes of the incubator and learned how to console her, her alarms went off. I worried I had done something wrong or that she was dying and no one was doing a thing to help her. I screamed for the nurse and learned, with frayed nerves, that preemies need reminders on breathing. I was equal parts amazed with my daughter, stressed at her having to start life like this and horrified that I somehow had caused this to happen. I went back to my postpartum room and desperately wanted to hide there. “What have I done?” was the refrain in my head that morning and for the next 18 months as I grappled with this new sense of guilt, shame, anger and extreme anxiety.

Midway through my daughter’s stay in the NICU, I had to go back to managing the company I was running because my maternity leave had not been planned out yet. Add to this that I had a wayward CEO causing me and my co-manager a lot of issues. And if that weren’t enough, I was struggling with postpartum recovery and providing pumped breastmilk for my daughter all while haphazardly trying to bond with her. What else could go wrong? Hmm, maybe a hurricane bearing down on our area? Yup. My brain was on overload the night of the storm as I alternately worried  about my daughter in the NICU and our having our house implode from the storm’s ferocity. I was in my room pumping when the power cut out. I yelled at the ceiling and went “Oh no you don’t!” The power magically came back on and stayed on resiliently
throughout the entire hurricane. As my husband loves to remark to people regularly, “God fears
a lactating mother.” The storm, however, affected our area’s water supply so we were on a boil
alert. Upon hearing that the hospital too had the same issue, I freaked out. We were told that
proper hand washing was key to Becky’s survival because she had little to no immune system
at that point. If I was a handwashing expert before, now I was a total clean freak. 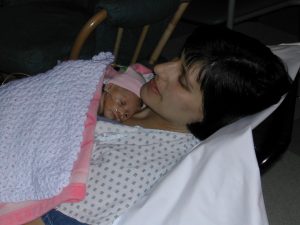 Becky’s latter half of the stay was even rockier than the start though I was able to finally get to do Kangaroo Care (skin-to-skin care) with her at last and was starting to truly connect with her. She had some heart issues, needed a blood transfusion, and then bam – sepsis. My daughter’s gray complexion terrified me and I know all too well that we could have lost her to that infection. Thankfully, though, she came through it and slowly we saw discharge at the end of a long NICU
tunnel. Feeding issues were being worked through and the team informed us that our daughter would be going home with medical equipment in the form of oxygen and a monitor. I found the
equipment intimidating but swallowed my pride and learned what I needed to know to help my
daughter. She came home and we were told to keep her on lockdown as cold/flu/virus season
approached. We came into our quiet house to a big balloon in the living room from my parents.
As much as I loved the balloon, it signaled our ongoing isolation from the world. My confidence
was weak and I worried about our ability to care for our medically fragile child. I was right, 5
days in, we had to get her admitted to the pediatric unit because the feeding and breathing
issues were a bigger problem than originally anticipated. After a couple of days in the hospital,
Becky came home with a new regimen and things slowly got righted after that.

During all of this I had had private crying jags at night. I knew that what I was going through was a lot but also that I was a new mother and exhausted to the extreme. Things did get better and my daughter and I had a strong bond. Becky was a true joy and despite all we had been through and wondering what was ahead, we enjoyed every moment regardless. Becky progressed, shedding equipment and starting to slowly attain her milestones. I had the local health department’s Infant Monitoring Program watching over the developmental aspects as Becky did not qualify for Early Intervention (EI). We took whatever help we could get and it really bolstered us. But by 18 months of age, Becky was not walking and barely talking and showing a real issue with food aversions. The health department social worker and their physical therapist told us we should get Becky evaluated by the Early Intervention program
again though they did not think she would qualify at this point. They were wrong. Becky more
than qualified at this point and I was shocked at 7 months of OT, PT and speech that followed.
And the same day Becky qualified for EI, she was diagnosed by her pediatrician with asthma. It
was then that I knew the NICU days were not over. In fact, we had likely only just begun.
Everything I enjoyed in life suddenly went gray save for my husband and my daughter. I
worried about my daughter’s future, about our family’s future. And I also kept going back to the
birth, the first time at my daughter’s bedside with the alarms going off and my sense of guilt. I was struggling and I just didn’t know what to do. Finally I said to my husband, I think I need help. I didn’t feel right and I was going to call my doctor. At my doctor’s office I was prescribed an antidepressant and that combined with talking with a social worker, got me back to feeling normal.

It was then, 18+ months out that I learned that I had experienced Postpartum Depression (PPD)
and PTSD. I thought PPD struck women within the first few weeks of birth and that they were
the ones that had extreme psychotic episodes.

I had no idea that some of the symptoms I had – anger, physical aches, inability to sleep, oversleeping, may all be symptoms experienced by women with PPD. Add in my vigilance over my daughter (which made sense due to her early birth) and my sense of not feeling a connection early on all suddenly made sense. But with this whole journey, no one ever talked to me about the signs of Postpartum Depression and PTSD. Not my OB, not my postpartum nurse, not at my postpartum check-up with my OB, not the pediatrician. Not friends, not family. I realized that I had to advocate for myself and that was key. 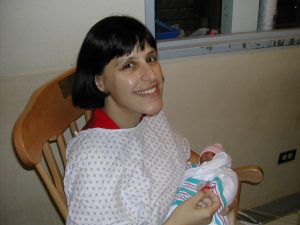 These days I make sure to ask preemie Moms that I support about this early on and remind
them that it is important to ask for help. I spend a lot of time supporting families around the
world and I make it super clear that while they may think they are fine, research shows otherwise
in the form of their child’s developmental outcomes. Once a mother realizes that her baby’s
outcomes are directly related to the self-care piece, suddenly self-care takes on a whole new
meaning. Moms who felt it important to sacrifice self-care were suddenly contacting their
doctors for help, getting in touch with a trauma therapist and more. I don’t casually mention it
either. I am supportively direct, the kind of help I needed and I know that they need, too.

A helpful resource in a preemie Mom’s arsenal is the websitehttps://www.postpartumdepression.com/. There on the front page are the literal neon signs of PPD symptoms that could have led me to talk to my doctor sooner. I wish I had had thiswebsite to navigate this murky and unspoken condition. But, thankfully, for the families I
support, it does exist. Resources like this can make a difference in raising awareness of PPD for
that mom, that baby and that family. PPD self-care shouldn’t be a maze. It should be straightforward and be supportive. Your doctor is always the primary source of information and advice on dealing with PPD.

Take a moment and share this with some preemie Moms you know who are struggling in the
NICU or after discharge. No onesie, no package of diapers will have the impact that
psychosocial health does with a preemie mom. It’s the best baby shower gift ever.

2 Comments on “It Took 18 Months to Know the Signs”