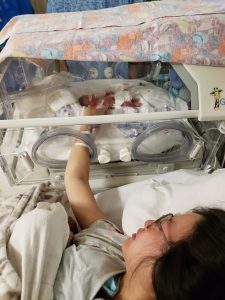 On July 19, 2019, on the way to our 21-week checkup and redo anatomy scan, we had no idea that I would be admitted straight to Labor and Delivery. I still remember my OB/GYN facial expression as she broke the news to my husband and me that we were going to lose our baby that day. I experienced severe cramping the night before, but as a first time-mom-to-be I wasn’t aware that I was contracting. Laying in the hospital bed I continued to contract and was told my cervix was shortened, dilated, and the membrane was bulging. The thought of losing my baby boy after just finding out the gender two weeks earlier and a few hours prior to seeing his face and heartbeat, I was confused and heartbroken.

I was admitted on full bed rest in the Labor and Delivery room for the next 20 days as I continued to contract. The first two weeks we were told countless times by multiple healthcare providers to “focus on our second child” and spoke of the procedure of how they would not resuscitate but would lay him on my chest if he were to come prior to 23 weeks. Laying in the hospital bed feeling hopeless and broken on July 24th, I recorded my first video telling our baby boy “Mommy is not giving up on you we’re going to fight for you”. The following day I started vlogging our daily progress and prayer requests with our community through Instagram because each moment and each day was a milestone for our baby boy. My membrane ruptured on August 3rd and as I laid in my hospital bed, I continued to fight to hold him in longer while placed on IV magnesium sulfate, epidural, and antibiotics. Two days later, after being in and out of consciousness without eating or drinking because of the side effects of the magnesium, on August 5th my husband and I decided to name our baby boy, Oliver Elijah Yu which means “Peace, the Lord is my God” an hour prior to him being born. Although I felt broken and guilty that I could not hold Oliver in any longer and even though I was numb waist down from being on the epidural for the past two days, there was peace in the room as God gave me the strength to deliver. The medical team advised us that we may not hear any baby noise, but Oliver gave out a loud cry to the surprise of everyone in the room. The team quickly bagged (gave him oxygen) Oliver, administered the surfactant to help his lungs open up and was taken to the NICU. It wasn’t until a few hours later when I was able to touch his tiny hand and see his face clearly for the very first time. Oliver’s birth weight was 1 pound 5 ounces and his height was less than 11 inches. Our first milestone was for him to survive the first 72 hours. After 72 hours, Oliver was transferred via ambulance to a level 4 NICU, and I went home for the first time in almost a month, without my baby. 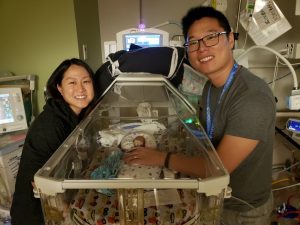 Our NICU journey was not easy; no one’s ever is. We are still processing through the mentally, emotionally, and physically tolling NICU journey. The most terrifying day of Oliver’s life for me was day 8 of his life was when I received a phone call from his NICU telling me that he was not doing well and had a sudden bowel perforation. My heart dropped and I lost it since the night before he was doing so well. We rushed over to give consent on the surgery, and I watched the team hover over him performing his surgery at his bedside. I was so scared that we would lose him. We were shortly hit with the news of his PDA which was diagnosed as large but due to bowel perforation the drug of choice was unable to be used. He had to use an alternative medication which may not be as effective in closing the hole in his heart. His oxygen support went as high as 100% at some point, but slowly and surely his PDA was starting to shrink. He was still “riding the vent”. He was placed on DART therapy twice and gradually showed signs of improvement. Having surgery so early in life he was unable to have my breast milk until two months later. Until he passed the barium test of his lower intestines, he was continually on TPN.

The barium test took over a week to conclude because his motility was so slow from never eating anything up until that point in his life. The bottle journey in the NICU is another hurdle that really tests a parent’s perseverance and patience. Oliver was on the surgical feeding flow chart, so his progress was even slower, but we understood that the pace was necessary especially since he had a digestive injury. Each step was a win as he gradually took on more volume, starting from taste tests, gavaging, to finally the bottle.

Each milestone was a victory for us and our community that covered Oliver in prayer. Although my community called me a warrior mama for fighting for my son’s life, my baby was the ultimate warrior. Oliver spent 126 days in the NICU fighting through each obstacle. If there was a “select all that apply” for micro-preemie cases Oliver seemed to have it all. He had grade 3 IVH on both sides, ROP on both eyes, sepsis, chronic lung disease, multiple blood transfusions due to anemia, seizure scare, PDA, PFO, ASD, jaundice, hyperglycemia, and so on. The story of Oliver’s victories over the hurdles can go on and on as he is truly a miracle baby fighting each odd that came his way.

The best memory in the NICU was when I was able to hold Oliver for the first time 31 days after birth due to being intubated. The feeling was priceless and pure joy, I was able to feel Oliver and he was able to feel me skin-to-skin. After that day we made sure to spend a minimum of an hour every single night doing kangaroo time, as long as he wasn’t having a bad day. Our other favorite memory was when we held and saw Oliver’s face and fuzzy hair without the CPAP gear as he was transitioned to low flow. Thankfully my husband and I were able to blog our NICU journey in detail and are continuing to write our story as Oliver’s journey is not over yet.

The 167 days life after NICU has been amazing but also challenging with his many appointments and therapies while always being cautious for Oliver’s health. Quarantine life started early for us, but it’s also a testament to how well Oliver is doing today.

“Each passing day, good or bad is a win to see our preemies thrive. They are truly our present day miracles!” – Oliver’s Mommy

Oliver is almost 10 months actual and 6 months adjusted. He does not require additional oxygen support but has daily nebulizer treatments to help his lungs. His eyes are improving but we still have monthly appointments to monitor and hopefully rule out the need for surgery as we wait to see if his veins improve from zone 2 to 3. He has a cardiology follow up in a few months due to multiple holes in his atrial flap that may require future surgery. We recently started introducing purees as he’s showing signs of interest while we eat. We’re praying his reflux continues to improve as he grows! Overall, although the journey itself is hard it is rewarding to see how Oliver is doing better and better. He was born in prayer and now is thriving through prayer. He is truly a living miracle in our lives!